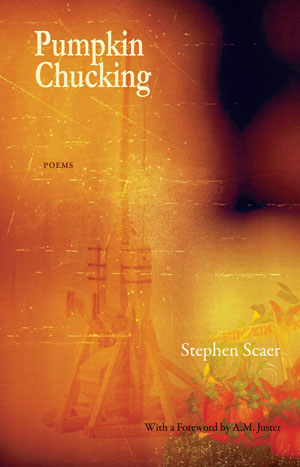 Stephen Scaer’s Pumpkin Chucking embraces the many joys of spirit and flesh, while acknowledging that death is an ever-present shadow. Her lyrics sometime sear, sometime soar, and are rooted in nature and her lived environment—arroyos, tundra, riparian forests—and further abroad in Haiti and Milan. These poems sing of the body both beauteous and bountiful, and contrapuntally lament trials of illness and surgery. The spirit of her lost son pervades her musings. Incantatory and mystical, she offers us “bells and charms/ that only girls can cast out like handfuls of sugar/ across any universe,/ any threshold.” This collection richly rewards its reader. Its release is an event to celebrate.

Stephen Scaer’s Pumpkin Chucking is a harvest of wit and enlightenment, gleaned from everyday situations. Scaer shows impressive formal dexterity, and inventive use of nonce and received forms—sonnet, double-dactyl, Old-English-style alliterative meter; he turns the limerick on its head as it transforms into a humor-laden meditative tool in sequences such as “Mid-Life Limericks” and “Classical Limericks.” Scaer’s delivery is immediate, simple but never simplistic, laying bare the human condition to reveal that “The triumphs that [we] seek/ are held for their own sake,/ and shower us with grace/ like petals on the grass.” This finalist for the 2012 Able Muse Book Award is a rare achievement in its deft marriage of the lighthearted and sublime. It is a book to relish from start to finish.

Right from the opening sonnet in Pumpkin Chucking, the poignant “Hannah at Ten,” you’ll recognize Scaer as an outstanding lyric poet. But the prevailing voice in  this collection belongs to a hugely entertaining, middle-aged, middle-class Everyman writing about the everyday. Take the lifeguard, sung in Old-English-style alliterative meter—“whistle-whirler,” “Thane of the Poconos.” Or the Hercules who can divert rivers into Augean stables with no hassles from the EPA. (And both of these pale compared to Scaer’s “Classical Limericks.”)
Some of the poems are exquisitely lyrical: “Light Box,” “Raspberry Patch,” “Long Trail.” Still, what you take away from the book is Scaer’s deadpan humor—a wit that’s wicked but not mean. Often as not, the speaker is himself the target. And the more the guy makes fun of himself, the more we love him. He speaks for us all.
—Deborah Warren

Stephen Scaer’s Pumpkin Chucking celebrates the New England landscape while still being universal . . . and it surprises us with wit in the winking way of Frost.
—A.M. Juster (from the foreword)

A collection with a range of forms as broad as Stephen Scaer’s Pumpkin Chucking can read like an exercise book—or like a tour of the expressive possibilities of all of English poetry. This book is decisively the latter. From the delightful “Mid-Life Limericks” to the modern idiom shaped to Anglo-Saxon alliterative verse in “Wendell,” each poem feels utterly natural, utterly native to the form. And don’t miss “Sarcasm,” a sonnet that deftly recasts Petrarch’s jewels of transcendent love as stones that wound both lover and beloved.
—Richard Wakefield

This is a wonderful and entertaining book of poetry. Stephen Scaer’s poems are full of wit, sarcasm and humor. His subjects are familiar to many of us: parenting, tedious jobs, home repair, dealing with middle age. But his well-crafted verse—the rhymes alone are worth the price of admission—is much more than that. Reading the poems, I was reminded of the voice of Screwtape dispensing advice to his devil-in-training nephew in C.S. Lewis’s The Screwtape Letters: the humor is aimed directly at that familiar reflection in the mirror. When I was done reading and admiring these poems, I was left feeling like the narrator standing by his grill smoking a rack of ribs in Scaer’s “The Sacrifice of Cain”: “I wish I were a better man.”
—Robert Crawford

Stephen Scaer of Nashua, NH, is a special education teacher with poems published in National Review, First Things, Cricket, and Highlights for Children. Pumpkin Chucking was a finalist for the 2012 Able Muse Book Award.